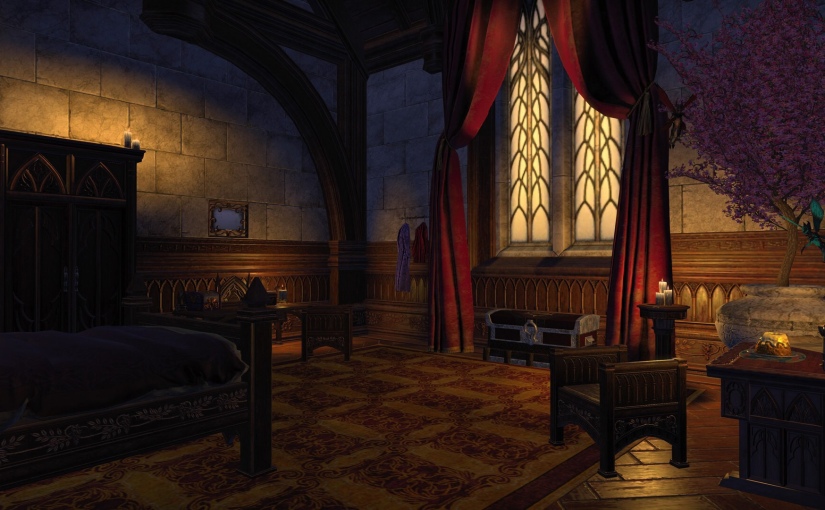 I took the key from the innkeeper and she turned and went back downstairs, leaving me in front of my door alone. I was tired, exhausted, and curious to see what my new home away from home looked like. I was looking forward to freshening up so I placed the key in the lock, turned it, and opened up the door to my room.

I walked into one of the most magnificent spaces I’ve ever seen. The room itself wasn’t terrible large, but it felt large because the ceilings were so tall. There was a large window on one side of the room draped in deep red velvet drapes. The glass panes were stained glass so it gave the room a warm glow as light shine through them.

I slowly walked around the room, taking it all in, observing and admiring every detail when a little fluttering noise caught my ear. Where was that coming from? I looked around and finally saw what was making that noise. Over by the potted tree were two little nixads flying and fluttering about it. It was a nice touch and made me remember the forests back home.

The nixads fluttered about by the tree, chasing the little lightning bugs that seemed to live in the pot. It was kind of cute to watch. I then noticed the table by the tree that had a sweetroll and a bottle of ale waiting for me. I also noticed a letter on the table addressed to me and decided to open it once I was done exploring my new home away from home.

I turned around and saw that on the far side of the room there was a little desk set up for me as well. I pulled my journal out of my pack and set it on the desk. I was looking forward to reading my travels and having a place to write. There was a wardrobe as well, which was empty. So I hung up my few outfits I had in there. On the wall hung a robe and a towel which I’d have to try out once I went to bathe.

I sat on the bed for a moment to test it out and was pleased to feel how comfortable it was. I was looking forward to truly testing that out later. I made my way back over to the table and sat down to enjoy my sweetroll and whatever alcoholic drink was in that bottle. After I had poured it I discovered it wasn’t ale, but some sort of fruity drink that was delicious.

I stared at the rolled parchment sitting on the table and noticed the seal. It looked like a royal seal. Maybe the letter was from Razum-dar? I cracked it open and began to read the contents of it, my jaw falling open with shock once I realized who it was from. Queen Ayrenn herself had written this, or at least signed it.

In it she went on about how pleased she was with the assistance I was offering her Eye, Razum-dar, and she set me up in this room to “have some comfort in a foreign land”. She then said that this apartment was mine as payment for assisting her majesty. I was taken aback by this unexpected generosity as Raz had been paying me very well.

Also written was how she had hoped my assistance would continue as she wanted to formally hire me on as an assistant to the crown, aiding in the affairs of the Aldmeri Dominion as needed. As a token of this rise up in stature and a notoriety she also ordered a new set of armor for me that I could go pick up from the local armorer. I suspected Raz helped out with providing my measurements.

I set the parchment down, shocked and stunned by everything I had just read. Wait until my friends and family hear about this back home! I decided a small celebration was in order and that I should make some arrangements to head back home for a week or two. However for now, I could at least get clean and get an ale down by the bar as a small reward.

Sucked in by the lore of ESO, I sought a way to connect more with my character and the story. I was inspired to create Keebler Sparrowgrass and document her journey through Tamriel and decided to invite you all come along for the journey. View all posts by iamkeebler